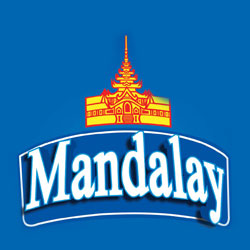 Takasago Beer Company from Japan ran the brewery in a short space of time of japanese occupation ( 1941-1945 WWII ) , so they renamed it to Takasago brewery , which later was converted into a miso and soy-sauce factory when raw materials came into short supply.

Edward Dyer was the first brewer . Since that time the factory was known as Dyer , Meakin ( Burma ) Brewery .

Mandalay plant was established in 1859 by the last Crown Prince Ka Naung for producing cannons, but has been changed by British into Beer Factory in 1886.